The following story comes from French-Canadian actress and author, Lise Thouin, who was inspired by her experiences to tell and dedicate this adventure to the many children suffering from cancer.  It was published in 1993 by Leucan, inc. in French and most recently released in Italian.  Sheila Fishman's English translation, seen here, is the first such published of any kind to date.  Please enjoy this heart warming story by one of Canada's most admired and loved celebrities —.
___________________________________________________ 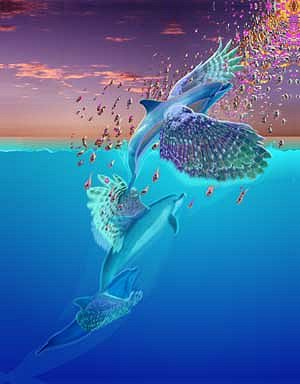 Magical stories exist.
They float like ribbons around the planet.
One day, quite unintentionally, I pulled on one of those ribbons and the story of 'Dreampearl' came to me.  I realized at once that the story was magical, because although I didn't know it, I felt as if I'd been familiar with it forever. . .
*          *          *

Dreampearl was a magnificent dolphin.  He lived with his mother and the rest of the family in one of the great Southern Seas.

His perfectly smooth shiny body glided through the deep water at remarkable speeds.  He was curious and he could swim for hours without tiring, astride huge waves that took him farther and farther on his discovery of the ocean.  He liked to laugh and to play with his friends, the blue flying fish, the yellow catfish and the little red goldfish. 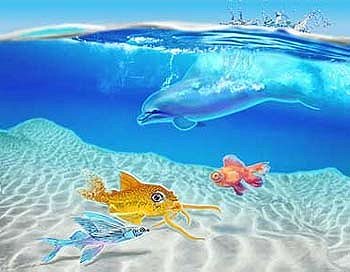 Sometimes he would leap out of the water, very high, and would turn a cartwheel and land close to them, splashing them with thousands of golden droplets.  It was so much fun!  The whole surface of the water was transformed into a vast foamy cloud!

But what Dreampearl loved most of all was to dive into the rosy beam of the rising sun.  He said he could hear music in it:

"Come, listen.  I've never heard anything like it.  I'm sure it comes from very far away. Perhaps from the stars!  If only I could fly" he added, "I'd go to the place where that music comes from."

"Dreampearl, your name really suits you, you're always dreaming!" said the blue flying fish.
"There's no such thing as music hidden in a sunbeam!" the catfish added.
"Besides, you aren't a bird, you can never fly, you're much too heavy and anyway, dolphins don't fly!" concluded the goldfish in his shrill little voice.
Dreampearl said nothing.  Smiling strangely, he looked at the sky.

One morning at sunrise, Dreampearl discovered two small dark blue circles on his back, like the buds of two little flowers.  Oh they didn't hurt, but the tickled and they felt a little itchy.

"I wonder what they can be?" thought Dreampearl.  "I've never heard of such a thing!  I'm sure it has something to do with rosy sunbeam.  I've been suspecting all along that it's magic!"

Every day the little flowers grew bigger; slowly they blossomed in a thousand shades of blue upon his back.  Something very special was happening.  Dreampearl could feel it deep inside, and some nights it was even a little frightening.

His mother was the first to notice the strange transformations on his back.  Very concerned, she asked Dreampearl to keep still for a moment so she could examine him. 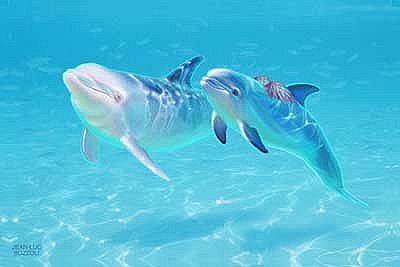 Finally Dreampearl understood what was going on.  He had wanted so much to fly, and now his wish was being granted.  He began to sing as only dolphins can, and his song described another universe.

Every day, again and again, Dreampearl dove into the rosy beam of the rising sun, the better to listen to the music.  Weeks and months passed.  His wings grew magnificent, folded along his back and surrounding him with shades of turquoise and mauve, with blue-gray and sky blue with violet. But sometimes the wings were very heavy and Dreampearl couldn't swim as fast as he used to.

More and more often he felt like being alone.  He still smiled of course, but in the middle of his heart there was something that felt like a deep sorrow.  Dreampearl was lonely.  He missed the music of the rosy sunbeam, music so sweetly beautiful, it made him cry.  He dreamed that he would become that music.  He spoke very little, as if all the words had been said, and deep in his eyes there was something infinitely soft. 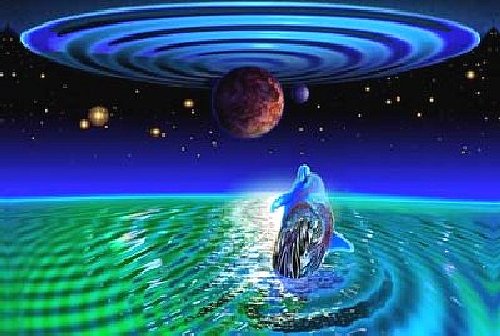 One day Dreampearl sensed that the time had come, that he was ready.  He awakened while it was still dark.  He swam on his back for a long time, gazing up at the stars.  He thought: "Today, I'll be going home."

No, he wasn't sad — not really sad.  It was just that he felt he was rather small to be setting out on such a long journey all alone.

The sky turned pale and one by one the stars were extinguished.  There was a silent pause between night and day, a moment of suspended nothingness, like a theater just before the curtain rises.  Dreampearl closed his eyes and suddenly, inside him, he felt the stirring of a brilliant magical force.  He chuckled.  This was marvelous!  All his fear had vanished.

"What a wonderful trip I'm taking today!  Wake up you lazy old Sun.  I want to get going!"

Slowly the sun came up, and as it rose, it left across the sea a rosy beam so wide, so bright, that fascinated birds flew over it in formation, back and forth, back and forth.

All of Dreampearl's friends were there: the blue flying fish, the yellow catfish, and the little red goldfish.  They said nothing, only swam around in circles.  Everyone felt a little like crying.

But they laughed when Dreampearl made some comical pirouettes in the water turned pink by the Sun.  Then he swam close to his mother and laid his head against her neck.  His mother stroked him with her soft fin for a long, long time. 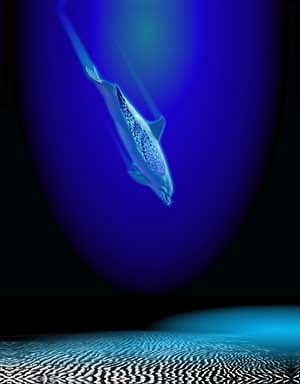